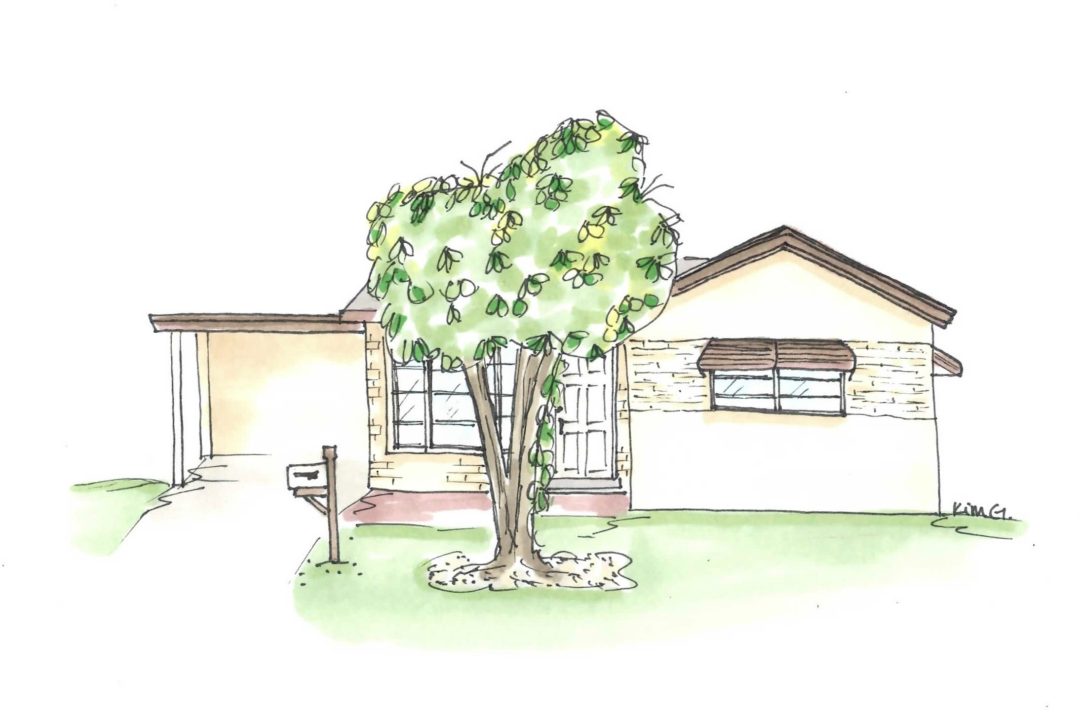 Our First Home Portrait by Kim from GallaDoodle

I finally have time to write this post!
We sold our first home!
And bought a new house!

We put our house up on the market on a Sunday night, and by Monday evening we already had a full offer on it from the first visitors.
30 days later we were out! It happened so fast!

I had such a love/hate relationship with our first home.

I loved it because it was the perfect little home to start in.
START being the keyword.
I had a pool like I always wanted, I had a beautiful kitchen with stainless steel appliances, 3 bedrooms, meaning that I could have my own office/craft room to create my personalized items for my little side business, a nice laundry room, and since it was kind of a “flip”, everything was brand new and I got to decorate it however I wanted and truly make it my own.
It was also the house we went to after we got married, the house we brought our pups to, the house where we brought Emma to from the hospital, and the house where we found out about Baby Boy!
If you look at it that way, that home was (is) truly special.

But I hated it because it was small. So small.
There was no closet or storage space.
The bedrooms and bathrooms were small, the living room space was small, making it difficult to manage when we had Emma and all her toys and MamaRoo and Jump-A-Roo and then play pen and walker were everywhere!
It wasn’t in a bad neighborhood, but it definitely was not in a neighborhood I wanted to raise my children in and send them to school in. By typing that I feel a little “ungrateful” because it really was not a BAD neighborhood to live in, but I just knew that it wasn’t where I wanted to raise my children. It was also far enough away from my parents, friends and the places we go to like malls, restaurants, and even my job.

Moving was especially hard since I am pregnant. Nobody let me lift anything, which is understandable, but at the same time I hate feeling like I’m doing nothing, just watching and directing people.
Plus, I just wanted to pack my own things! That was so hard. I can’t even tell you the amount of times my husband yelled at me for picking things up or trying to lift stuff.

We were supposed to be at my parents’ house for 2 weeks, until we closed on our new home.
Long story short, that did not happen, and we ended up being stuck at my parents’ for much longer.
Living with my parents for a month wasn’t bad! What was bad was not having the comfort of my own home. I always had to be dressed decent which is especially hard while pregnant, instead of being able to just get home and throw my bra on the bed lol! And we were all contained in one small bedroom. Me, Jaime, Emma and the two dogs. Dexter stayed at Jaime’s mom’s house.
The hardest part was my dogs, they were so annoying and wanted to mark their territory all over, which is understandable, they were probably so confused, but still very frustrating to have to deal with!
At the same time, we had home cooked meals almost daily, which was so nice, especially since my mom is a bad ass cook! And waking up and not having to worry about dropping Emma off, and then leaving work to pick her up was also a nice break.

In the end, it all worked out, and we ended up closing on our new home the day Hurricane Matthew was supposed to hit us hard.
Are we crazy or what?!
But we took the chance, and signed those papers anyway, and thankfully Matthew did no damage to the house, or our county, besides some power outages, which did not affect us either.

I am so thankful that everything is done! I am happy we were able to find a new home for us to live in for a long time, and make new memories in.

I will be sharing our new home with you as soon as it’s “ready”.
We still have things to put away, and there is nothing up on our walls yet, but slowly but surely, our new house is becoming a home, and I love it! 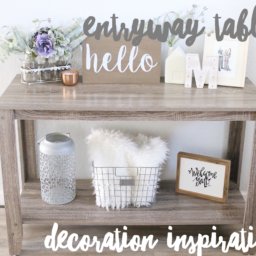 Our Entryway Table
When house hunting for our new home, I really wanted was an entryway big enough for me to put a table on. I had always wanted to have an entryway table to decorate for each holiday and each season. I wanted it to be a nice “welcome” piece, the first thing people saw when they walked into our house…