That Time We Were In A Car Accident… 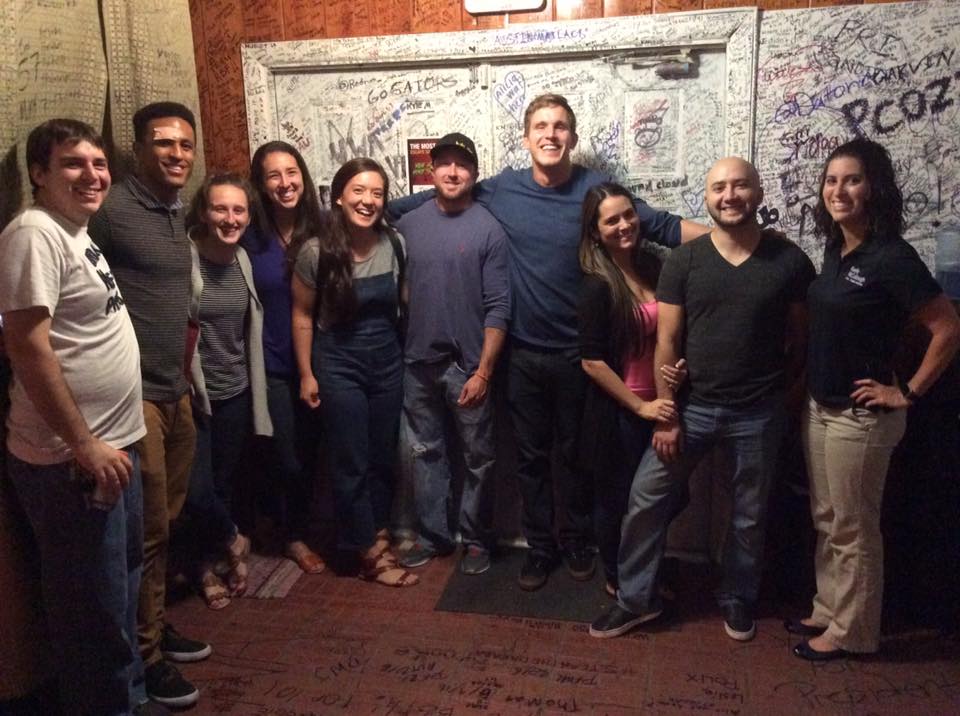 (Photo from Escape Room’s Facebook page, minutes before the accident.)

I was leaving an escape room with Jaime and our friend Ashly one Friday night at around 11. This is something we enjoy doing together, and do often.
We had such a great time! We had just tried a brand new company, at a brand new place, and we were put in the escape room with a big group of strangers.
It’s always a hit or miss with strangers. Sometimes they want to take over and be bossy because they don’t know you so they don’t care, other times they just stand there and do nothing but take up space and get in our way. But this group was actually really cool and excited to be there and work through the clues to escape the room. We all worked really well together and we managed to successfully escape the room in time.

We had just left the escape room, and drove down the street.
We were stopped at the first light, I was texting my friend and next thing I know everything is black for a second. Confused I started to smell smoke, I looked around and all I could see was this lady in a car next to us yelling something.
Then we all came to it and realized that we were in a car accident.

After asking each other if we were ok, we quickly got out of the car, and walked across the street to the gas station and Jaime called 911. “We were just in a car accident, we were hit from behind, my wife is pregnant and the seat belt squeezed her stomach really tight.”
I was freaking out! The amount of pressure and pain I felt on my lower abdomen was so hard, that all I kept thinking about was my baby. Praying, hoping, that everything was going to be ok, checking myself continuously to make sure that there was no blood dripping down my legs.

The man that hit us had to be texting or something because he hit the back of our car at full speed as we were stopped at a red light. We still don’t know what the heck he was doing.

Finally the ambulance gets there, and they quickly put me in the back, strap me on the stretcher and put monitors on the baby and I, and stick an IV in my arm. They start asking a bunch of questions, about me and the baby and tell me that they are going to a hospital that’s a little farther from where we are, but that has a better pediatric unit just in case something was wrong with the baby.

I get to the hospital and there are no rooms available in the emergency room so I’m just laying in the stretcher waiting in the hallway.
All I wanted to do was get an ultrasound, I just wanted to see the baby!

Finally they put me in a room, I had to do all these tests, then FINALLY! I saw my little baby moving around!!! I unfortunately could not hear a heartbeat or see baby very clearly since the ultrasound machine they had was not the best. 🙁 But, the nurse claimed that he did see a little heart beating on the screen, which I didn’t get to see but I definitely saw baby flipping around! 🙂

I got home at around 3:00 AM the next day, just happy that my little baby was ok, that everyone else was ok, and that all we each got was just some bumps and scrapes and bruising.

This was seriously the scariest experience of my life to date, and if I wasn’t pregnant I think that it would have been totally different, but the fact that the only thing I felt when that man hit us was throbbing pain and pressure on my lower abdomen, where my baby is currently living, made me flip out!

At the same time, until I saw my doctor TWO WEEKS after the accident I wasn’t at peace, and I was scared to tell people that I was pregnant in case something was going to happen to the baby.
Heck, I barely even told anyone about the accident and just went back to work the following Monday after the crazy weekend, so I’m sure a lot of people reading this will be surprised with this story.
Anyway, I wanted to move my appointment up so badly, but since nothing had changed in my body, no bleeding, no pain, I just kept the original appointment.
Thankfully that appointment also went well, and I finally got to hear baby’s super fast and strong heartbeat!

I am so happy everything is ok with my little one!
But I’m not going to lie, I have a bit of PTSD while I’m in the car now, especially with Emma.
Because no matter how cautious I am on the road, unfortunately there are people out there driving not paying attention, and I experienced that first hand.

Does anyone have any crazy stories from when they were pregnant?
Share them with me in the comments below!