Oh my gosh, what a stressful, scary experience this dumb hurricane was! 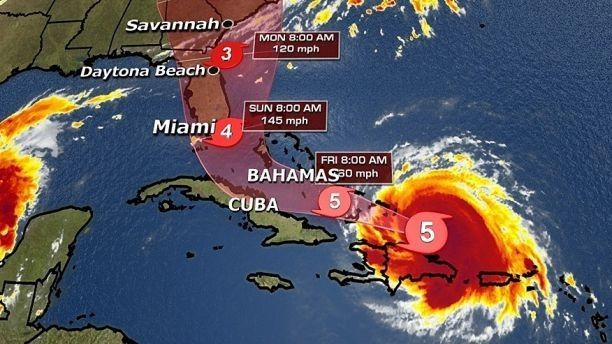 Hurricane Irma was supposed to hit us as a Category 4 Hurricane.
The news was super scary, telling everyone to prepare themselves and constantly reminding us of how serious this hurricane was going to be.

Grocery stores were empty, gas stations were insane, people were going crazy – it was chaos! If you follow me on Instagram you saw the ridiculousness unfolding day by day!

I can’t even explain how awful it is trying to prepare for a hurricane as a parent and as a home owner. The last hurricane I experienced was Hurricane Wilma and that was nothing!  I think it hit us as a category 2.
We lost power for 2 days, had no school for 2 weeks – to me that was vacation lol!
Getting to hang out with all my best friends who lived in my neighborhood was great!

This time around was very different! I had my own house and 2 babies to worry about.

We were not prepared. We moved into our new home less than 1 year ago – we had no shutters, no extra water bottles and our cars’ gas tanks definitely weren’t full.

So we were staying.

Thankfully I was able to get a bunch of food and supplies to last us a few days in case we did get hit badly.

I separated everything in different bins to keep it all organized, plus I also wanted a quick way to be able to grab and go everything in case we were told to evacuate or if we wanted to go somewhere last minute.

I had the different types of food separated, I had a bin for the kids’ food and a bin of supplies like a ton of extra batteries, candles, first aid kit, etc.

We ended up being able to get some shutters thanks to friends, and we were able to put them up with the help of my dad and our friend Jorge.

It was amazing to see people come together to help other people, specially nowadays when it’s hard to see that.

From our neighbors offering their friends’ extra panels, to an old high school friend reaching out on Facebook, to my mom’s friend offering her old shutters, and my best friend giving us her extra plywood – I am so thankful!

After DAYS of stress and preparing, we had shutters up on most of our windows and everything was moved inside.

We decided that the kids would sleep with us that night. I was excited for some extra Emma cuddles!

I couldn’t sleep through the night of the hurricane. The wind outside sounded horrible, it sounded like all our windows were going to break.

We set up camp in the living room when we lost power, we pushed the couches together and just laid together waiting for the storm to pass. Emma kept saying “Hurricane Party! Hurricane Party!” because it kinda did feel like a party haha! The house was a mess, we had junk food and snacks all over the place, lights were off.. Sounds like a “party” to me!

We kept getting tornado warnings which was the worst part because there had been reports of tornadoes touching down by us.

I wanted to keep the kids close to me in case we had to run to hide and take cover so I wore Emma and Owen for a long long time.

As the weather got worse and the tornado warnings kept popping up in our phones, we made the bathtub into a bed and hid in the bathroom every time we got a warning! That was the only room in the house with no windows or outside doors.

We were able to watch the storm outside through our bedroom doors. I was freaking out about not having shutters for those doors, but at the same time I was thankful. Thankful because being able to see outside calmed me down.

Like I mentioned above, the sounds were really terrible, it definitely sounded worse than it looked outside. So to be able to SEE what was going on gave me a little peace of mind.

We were able to watch the wind knock down our backyard fences and see all the leaves and trees falling.

We did our best to keep the kids entertained. Having no AC in South Florida is no joke! Even with the weather being a little cooler than usual because of the storm, the temperature in the house was almost 90 degrees. I couldn’t wait to run outside and get some fresh air! Owen and Daddy hung out with their shirts off, and Emma and I wore short shorts and tank tops haha.

The storm quickly passed, we ended up not getting a direct hit, but we still lost power for a day. And we were extremely lucky for that! Some friends lost power for over a week!

Did you get scared by Hurricane Irma, or any hurricane ever?
Let me know below!