So ever since I was younger I always thought I would have a son.
For some reason I’ve always had “I’ll have 2 boys and 1 girl” in my head.
So when I got pregnant I was like it’s probably going to be a boy, because I KNOW I’m a boy mom, I just KNOW I’m going to have a son.

When I first announced my pregnancy, everyone started telling me that they thought I was having a girl.
Most Old Wives’s Tales said girl.
I was like ok, maybe it is a girl!

Then as my bump grew everyone started saying they thought it was a boy.
“You have a boy belly, or you are carrying low and it’s usually a boy…”
So my “I’m a boy’s mom” thoughts started coming back and I was like ok, maybe it’s a boy!

Fast forward to the gender reveal ultrasound.
Yasmin (the tech) is super sweet, she was so confident in what baby was.
She took pictures, made me move to get other poses, kept my secret and did everything perfectly for Jaime and I!
After the scan Jaime and I were talking about it and I told him how I thought it was a boy because she wanted to get so many pictures, so I felt like she was trying to get penis pics, haha, there’s really not a better way to say it!
Then Jaime said that maybe she was just trying to get pictures in different angles to make sure that there was nothing there.

Ugh! Seriously! I was so confused! Was it a boy or a girl?!
I would have to wait 4 whole days to find out!

As you can see in my last post, the closer it got to the reveal day the crazier I was getting.
I was SO nervous!
Also, the fact that I had no idea of what my baby could be was bothering me!
How did so many other people have guesses?
How did they all have reasons to why they believed my baby was either a boy or a girl but I was sitting here clueless and getting all these different feelings in my head.
I didn’t understand.

I had dreams that it was a girl, twice.
Jaime did too, once.
Then after the ultrasound, that night I kept waking up, switching between genders in my dreams.
First it was a boy, then a girl, then a boy, etc.
The night before the gender reveal I dreamt that it was a boy again.

I made it very clear that I would have been happy with either gender.
Girl or boy, as long as it was healthy, being my first baby, I didn’t care.
I plan on having more kids, so I can always try for the opposite sex later, no big deal.

So… With all of that said… Baby is a GIRL!

Yes, we are happy! I’m happy, my husband is happy, he told me a boy would have been easy but a girl will be a challenge and so much fun.

I still believe I’m going to have a son, maybe not 2 because in my head it was always like ok, I’ll have 2 boys, try for the girl and get her the third time..
Well, I guess the little lady wanted to be first in line so she’s coming!!! 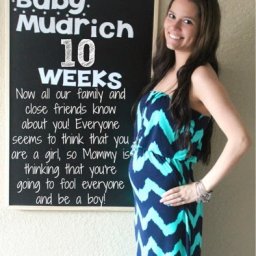 How Far Along: 10 Weeks Weight Gain: Still just about 3 pounds. Stretch Marks? No! Thank goodness! Maternity Clothes: Not wearing any yet. Sleep: Naps naps naps is all I want. Best Moment This Week: Texting a bunch of family and friends that live far away and letting them know the good news! Worst Moment This Week:… 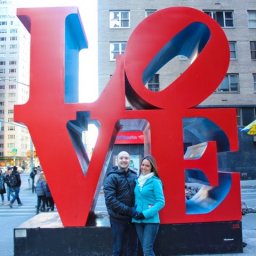 So baby’s first trip was to New York City! And boy it was COLD! I was so worried about the plane ride since I have been getting so sick by just sitting in the passanger’s seat of the car, I took my nausea pills, got those sickness bands and some saltine crackers. Two flights later… 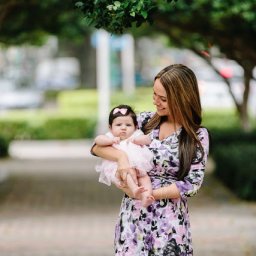 What A Difference A Year Makes…

One year ago today I woke up expecting it to be that time of the month, and to my surprise it wasn’t here yet. Thinking about it, I had been waking up hot and sweating in the middle of the night for the last couple of nights, and my sense of smell was crazy. I…

How Far Along: 25 Weeks Weight Gain: About 18 pounds. Stretch Marks? Nope! I can definitely see veins on my belly and my linea nigra is now showing up above my belly button. Maternity Clothes: I got some maternity tops since they’re stretchy on the side and most of my regular shirts are beginning to look tight and some… 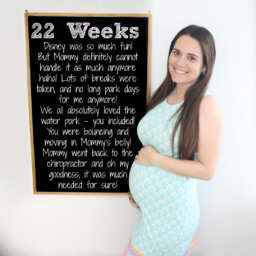 How Far Along: 22 Weeks Gender: Girl Weight Gain: About 10-12lbs! Maternity Clothes: Yes! Best Moment This Week: Disney and Typhoon Lagoon! So so fun! Worst Moment This Week: Not being able to go on all the fun water slides with your brother and sister. Miss Anything: Not really! Movement: Yes! Cravings: Nothing specific right now. Queasy or Sick: No! Have You Started To Show… 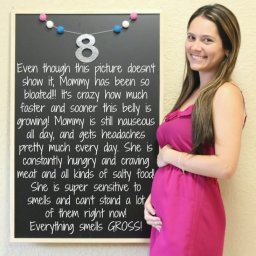 How Far Along: 8 Weeks Gender: No idea! Weight Gain: Maybe 1 pound. Maternity Clothes: No Sleep: If I wake up in the middle of the night, it takes me a while to go back to sleep.. Best Moment This Week: Telling more people! Worst Moment This Week: Lots of headaches, and everything smells awful!!!!! Miss Anything: Not being…

How Far Along: 5 Weeks Gender: No idea yet! Weight Gain: None so far, I gain a pound then it seems like it’s gone lol. Maternity Clothes: No Sleep: I wake up with Emma, and then it takes me a while to go back to sleep. I’m usually awake for about 2 hours in the middle of the night…. 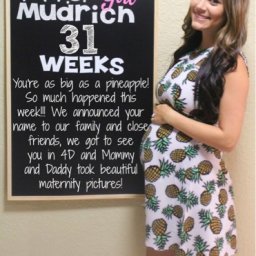 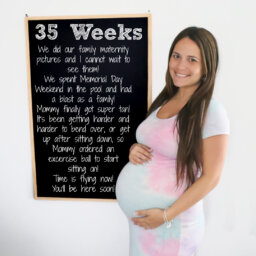 How Far Along: 35 Weeks Gender: Girl Weight Gain: About 2olbs! Maternity Clothes: Yes! Best Moment This Week: Doing our Family Maternity Photos! Worst Moment This Week: Sciatic Pain has been soooooo horrible! 🙁 Miss Anything: Being able to eat whatever I want, whenever I want and being comfortable overnight. Movement: Yes! Cravings: Bakery items, like soft cookies and homemade… 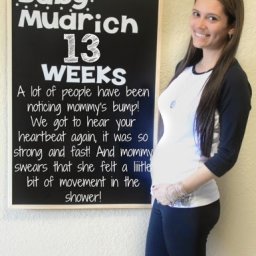 How Far Along: 13 Weeks Weight Gain: 3-4 pounds. Depends on how bloated I am certain days lol! Stretch Marks? No! Yay! Maternity Clothes: I’m not wearing maternity clothes but I am loving leggings and baseball style tees! I want to buy one in every color and size and just customize them all! Sleep: Fine…. 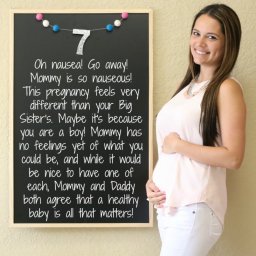 How Far Along: 7 Weeks Gender: No idea! Weight Gain: None so far, not that I notice. I still have about 8 lbs from my first pregnancy, so starting weight this time around is 108lbs! Maternity Clothes: Not yet, but I’m sure it will be sooner this time. Sleep: I wake up with Emma, and then it… 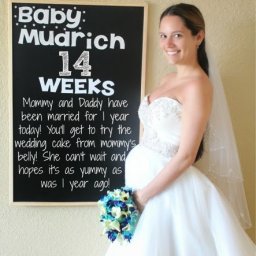 How Far Along: 14 Weeks Weight Gain: 3-4 pounds still, Stretch Marks? Nope! Maternity Clothes: No, my clothes are getting a little tighter around the bump, but it’s not uncomfortable, so I’m ok for now! Sleep: Fine. I get very hot though, AC has been on 69! Best Moment This Week: Posting the pregnancy announcement online, 1 year wedding anniversary! Worst…

We’re Having A Baby!

It was January 13th, 2015 and I was supposed to get my period that day. I had been feeling a little weird, for the last couple of nights I had been waking up in the middle of the night hot, sweaty, and my sense of smell was ridiculous! I woke up that morning, went to…

Owen is about to be 1 (where has the time gone?) and I realized that I never shared his Gender Reveal pictures! We found out that Owen was a boy on our 12 week ultrasound check up! He was not shy and showed the tech, Jaime and I that he was a HE! Lol! 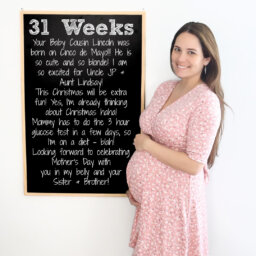 How Far Along: 31 Weeks Gender: Girl Weight Gain: About 20lbs! Maternity Clothes: Yes! Best Moment This Week: Your baby cousin was born safe and sound! Worst Moment This Week: Failing the glucose test.. I have to take the 3 hour now! 🙁 Miss Anything: Desserts Movement: Yes! Cravings: None.. The broccoli obsession is kind of over, finally. Queasy or…